Eugene Levy thought the highlight of his Tuesday would be taking his car in for servicing — until he arrived home and heard some “surreal” and far more exciting news.

A publicist for Schitt’s Creek had called to tell the Hamilton native that he’d just got an Emmy Award nomination for lead actor in a comedy series for playing patriarch Johnny Rose on the Ontario-shot show, which airs on CBC and Pop TV and is also on Netflix.

“I have to say, I’m somewhat surprised,” Levy said in a phone interview from his Toronto home after the nominations were announced.

“I thought that we had a pretty good shot with Catherine, I thought that would have been our best shot. Maybe it’s just the Canadian in me where you think, ‘Oh, we’re probably not going to get more than one, if we get one.’ But then they just kept rolling in.

“I think it’s pretty incredible ending up with four nominations on this show. And believe me, it’s not to say they’re not well-deserved, because they are. I think it’s a pretty fantastic show that we’re doing here. But you just never think it’s actually going to get that kind of recognition.”

This is the first Emmy love for Schitt’s Creek, which also stars showrunner Daniel Levy and Annie Murphy as a formerly wealthy family who now live in a motel in a small town they once bought as a joke.

The Levys share the nomination for best comedy series for being the co-creators of the half-hour show, which has become an international phenomenon and recently finished filming its sixth and final season.

“As I told my son Dan this morning, ‘All the hard work and all the long hours that you put into the show have finally paid off in big dividends,“’ said Levy, noting Dan was vacationing in Italy when the nominations were announced.

“It took a long time for the awareness factor on the show to kick in,” Levy said.

“In the last year or so there has been a lot of awareness in terms of fans, in terms of viewers and certainly in terms of finally spreading across the entertainment industry.... But still, you just never think you quite have enough to make a dent on the Emmys scene.”

Eugene Levy and O’Hara were also on the Emmys circuit together in 1982 and ‘83, when they were starring on SCTV and got nominations for their writing on the sketch series.

“I remember being with Catherine, with John Candy, with Marty (Short),” Levy recalled.

“It was just a party. We were much younger, and the fact that a bunch of us little Canadian kids were down there at the party was kind of exciting. Now with Schitt’s Creek, it’s nice to finally see all the hard work that you’ve been doing pay off in terms of being on the same stage, so to speak, as all the top shows in the field.”

Other Canadians named in Tuesday’s nominations include Ottawa native Sandra Oh, who is up for two trophies. One nomination is for her leading role as an MI5 operative hunting down a female assassin on BBC America’s Killing Eve, which airs on Bravo in Canada.

Last year Oh made history as the first Asian woman to be nominated for an Emmy for lead actress in a drama series for the same show. Her other nod this year is for guest actress in a comedy series for hosting NBC’s Saturday Night Live.

Full Frontal with Samantha Bee, hosted by the titular Toronto-born comedian, is up for best variety/talk series. Bee also shares a nomination for writing on the show, which airs The Comedy Network in Canada.

Toronto-raised Lorne Michaels earned two nominations — one for writing on NBC’s Saturday Night Live and another for being part of the executive producing team.

Canadian-born former Vanity Fair editor Graydon Carter is a contender for being part of the producing team of HBO’s The Inventor: Out For Blood In Silicon Valley.

Nova Scotia’s Paula Fairfield shares a nomination for sound editing on HBO’s Game of Thrones, which has a record-breaking 32 nods this year.

HBO’s Sharp Objects, directed by Montreal filmmaker Jean-Marc Vallee, is up for trophies including best limited series. Vallee’s Crazyrose Productions is named in that nomination.

And several Canadians who worked on The Handmaid’s Tale are also up for honours, in categories including production design, best fantasy/sci-fi costumes, and picture editing.

The 71st Emmy Awards will air Sept. 22 on Fox and CTV, with the host yet to be announced. 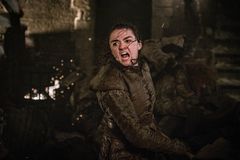 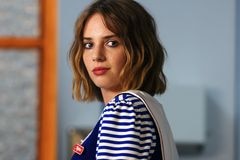 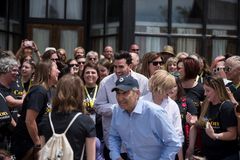