Hundreds of people across Canada are rounding out the worst week of their lives. They are the friends and family of passengers aboard Ukraine International Airlines Flight 752, who perished randomly and pointlessly because the Iranian military, by its telling, made a mistake.

To the extent that political gestures resonate in these situations, there are few “right” things a leader can do and just about an infinite number of wrong ones. The last time Canada experienced a crisis of this type and magnitude – the Air India disaster of 1985, when a bomb exploded aboard Flight 182, where a majority of victims were Canadian – Canadian leadership chose a number of wrong ones.

In the aftermath of that crash, prime minister Brian Mulroney phoned India’s prime minister to offer his condolences, as if the tragedy wasn’t a patently Canadian one. Mr. Mulroney’s government was slow to set up a hotline for victims’ families, slow to provide information and slow to connect personally with those who lost loved ones. “Mr. Mulroney has not sent condolences to the individuals [affected] by the crash,” a spokesperson for the families was quoted in The Globe and Mail nearly a month after the explosion. The article also noted that since Mr. Mulroney was on vacation, the families would likely meet with a senior adviser instead.

Since then, and particularly in recent days, the Canadian government has proven it has learned from the mistakes of the Air India disaster. Prime Minister Justin Trudeau has stood in front of cameras almost daily since Wednesday’s crash, and Foreign Affairs Minister François-Philippe Champagne has been tweeting updates on visa approvals for Canadian officials seeking to go to Iran. A national hotline for relatives and friends of victims was set up within days.

Mr. Trudeau’s personal statements have also hit just the right notes; he has been outraged for those who need to see their anger reflected in leadership, and sorrowful for those who need to see their pain acknowledged and understood. Partisans have already chalked up Mr. Trudeau’s empathy to skilled acting on the part of a former drama teacher, which is a fine way for curmudgeons to console themselves while ignoring the actual impact Mr. Trudeau has had on affected individuals – which, based on their telling, has been profound.

The Trudeau government has had plenty of communications problems in the past, but it doesn’t appear to be suffering from those issues now. In his first address hours after the crash, when information was still scarce, Mr. Trudeau prudently said that he would not rule out the possibility the plane was shot down, even as the Iranians claimed a missile attack on a commercial plane would have been “impossible.” Even more prudently, Mr. Trudeau later declined to engage with reporters’ questions about whether to blame the United States for escalating the conflict by killing top Iranian General Qassem Soleimani.

No doubt the Prime Minister recognizes there is little to be gained, and a whole lot to lose, by taking too strong of a position in terms of blame at this point. While he remains wisely circumspect, the Iranian people, who bravely took to the streets by the thousands over the weekend, are clear about who they hold responsible. The chief executive of Maple Leaf Foods, meanwhile, posted a Twitter thread Sunday evening in which he condemned the “narcissist in Washington” for escalating tensions leading to the crossfire killings.

These are fair positions for individual citizens to take, and reckless ones for a political leader in the early days after a disaster. To his credit, Mr. Trudeau has resisted invitations to wade in, and has instead remained focused on the victims, their families and the profound loss for Canada as a nation. If nothing else, that has to make at least a small difference to the Canadians currently grappling with the worst week of their lives. 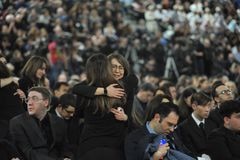 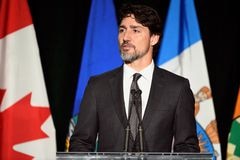 ‘Outraged and furious’ Trudeau urges Iran to take full responsibility after admitting it shot down Flight 752 in error
January 17, 2020 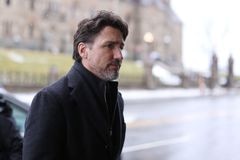 Follow Robyn Urback on Twitter @RobynUrback
Report an error Editorial code of conduct
Due to technical reasons, we have temporarily removed commenting from our articles. We hope to have this fixed soon. Thank you for your patience. If you are looking to give feedback on our new site, please send it along to feedback@globeandmail.com. If you want to write a letter to the editor, please forward to letters@globeandmail.com.
Comments