The arrival of the new coronavirus in Canada has health officials focused on two fronts: containing the spread of the virus and reassuring an increasingly worried public that the overall risk remains low.

Health officials confirmed the first “presumptive” case of coronavirus on Saturday. On Sunday, Canada’s chief public officer of health Theresa Tam told a news conference that a Toronto man, who is the first person in the country to test positive for the SARS-like coronavirus, was symptomatic on an airplane last week that arrived in Toronto from Guangzhou. On Monday, the National Microbiology Laboratory in Winnipeg is expected to verify that the man has the coronavirus. Tests by Ontario’s public-health lab on Saturday said the man tested positive for it.

Health officials are working to contact passengers seated within a two-metre radius of the man to inform them of the risks and advise them to monitor for the development of any symptoms.

Global concern over the coronavirus, known as 2019-nCoV, has been mounting since Dec. 31, when Chinese officials first reported it to the World Health Organization. As of Sunday, the virus has sickened more than 2,000 and caused at least 80 deaths. The vast majority illnesses are in China, but the virus has also spread to Europe, Australia and North America.

Despite reassurances from Dr. Tam and other health officials that the coronavirus poses a very low risk to Canadians, some have taken to social media to question Canada’s response and spread misinformation about the virus, presenting health officials with a new challenge of quelling growing public unease.

Susy Hota, medical director of infection prevention and control at Toronto’s University Health Network, said many concerned people with no symptoms have been showing up to the hospital, worried that they could be infected.

In Vancouver, Caroline Ku, a woman with a depressed immune system, said she was “terrified" of the new coronavirus reaching British Columbia. She wore a mask when she attended a parade as part of the Lunar New Year celebrations.

“I can’t risk infection – cold, flu, coughs. And the thing is, there is so much stuff [about the new coronavirus] on the internet that we don’t know what is fake,” Ms. Ku said.

In a note sent to staff on Saturday, Andy Smith, the president of Toronto’s Sunnybrook Hospital, where the man is being treated, highlighted the problem of misinformation and said the hospital will make every effort to be open and transparent.

“Please also ensure your patients are aware Sunnybrook remains open and clinics and procedures will continue to operate as per normal,” Dr. Smith wrote. “The hospital is safe for patients and visitors and we do not have a reason to veer from our normal operations.”

Conflicting information from some official sources is also creating confusion. On Sunday, the director of China’s National Health Commission said 2019-nCoV is getting stronger and spreads among people before they are symptomatic.

Several infectious disease experts have expressed doubt over those claims.

Dr. Hota said she’s interpreting the comments “with caution.” While it’s not impossible for people to spread illness before they are symptomatic, it isn’t common. It’s also unclear what Chinese health authorities are basing the claim on, she said.

Tedros Adhanom Ghebreyesus, the director-general of the World Health Organization, announced Sunday that he was en route to Beijing to meet with government and health officials leading the response to the coronavirus to “understand the latest developments and strengthen our partnership with China in providing further protection against the outbreak.”

What is known so far is that while the new virus is similar to SARS in some respects, infectious disease experts say they still don’t know how contagious it is or how many of those who contract it will become seriously ill. Some preliminary research shows that the vast majority of deaths have occurred in older men with pre-existing health conditions. Scientists will continue to study the virus as information from new cases becomes available.

The Toronto patient, a man in his 50s who had recently travelled to Wuhan, the epicentre of the outbreak, landed at Pearson Airport on Wednesday. He departed from Guangzhou on China Southern Airlines Flight 311 on Tuesday. While he was on the plane, he experienced a dry cough and muscle aches, said Eileen de Villa, Toronto’s medical officer of health.

The day after he arrived, he called 911 when his illness worsened. He informed the dispatcher of his symptoms and recent visit to Wuhan, which allowed paramedics and hospital officials to take the proper precautions, such as wearing masks, eyeglasses and gowns. Since then, the man has been in stable condition in isolation at Toronto’s Sunnybrook Health Sciences Centre.

“The patient will not be discharged until we can be assured that they are making a full recovery and no longer pose any risk to public health," Jerome Leis, medical director of infection prevention and control at Sunnybrook, said on Sunday.

Only those who were seated in close proximity to the man are being contacted by health officials because the risk to others is low, Dr. Tam said. According to scientific evidence, the coronavirus is spread by droplets, so the people who face the highest risk of infection would be those in close contact with the infected individual for prolonged periods, she said.

Dr. de Villa said passengers contacted by health officials will not be placed under quarantine. Instead, they will be told to monitor for the development of fever, cough or any other symptoms for the next 14 days and be in contact with health authorities if they develop.

Dr. Hota said the response is prudent. “From a public-health perspective, what they’re doing makes sense,” Dr. Hota said, adding that simply walking past the man on the way to the bathroom is unlikely to put anyone at risk.

Danuta Skowronski, epidemiology lead of influenza and emerging respiratory pathogens at the BC Centre on Disease Control, said the centre does not recommend the wearing of masks broadly in the community. “We may recommend wearing a mask to a patient who is sick, when they are, for instance, presenting themselves to a health-care facility, in order to prevent others from becoming infected,” she said.

“But it is not a general recommendation for community members. It doesn’t help in terms of the management or reduction of risks associated with respiratory illnesses.”

With reports from Wency Leung and Andrea Woo

Opinion
The coronavirus is now in Canada, but thanks to the lessons of SARS we are better prepared
January 27, 2020 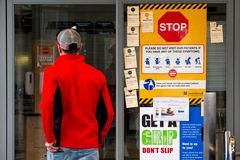 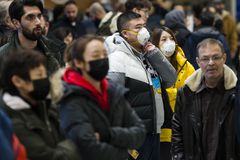 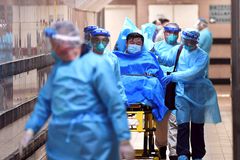 Follow Carly Weeks on Twitter @carlyweeks
Report an error Editorial code of conduct
Due to technical reasons, we have temporarily removed commenting from our articles. We hope to have this fixed soon. Thank you for your patience. If you are looking to give feedback on our new site, please send it along to feedback@globeandmail.com. If you want to write a letter to the editor, please forward to letters@globeandmail.com.
Comments