Shadows creep across the arena as the rodeo begins at Writing-on-Stone. A young woman on horseback carries a flag as O Canada is played. Cowboys stand and sing, hats in hand, beneath a powder-blue sky.

For 54 years, the event has been contested amid the canyons, grasslands, hoodoos and sandstone cliffs of the Badlands in southern Alberta. Cowboys compete beneath a crescent moon and camp beneath the Milky Way in Writing-on-Stone Provincial Park. In July, the park was designated a UNESCO World Heritage Site for the collection of thousands of Indigenous rock carvings and paintings within it.

The ring sits at the bottom of a valley carved by ice 10,000 years ago. The Sweet Grass Hills of Montana, 2,128 metres high and 12 kilometres away, serve as a backdrop.

A few years ago, a rattlesnake slithered out from beneath the bleachers and into the arena. The competition was delayed until someone could round up the rattler and safely release it.

Cowboys and cowgirls bring their horses to drink in the Milk River, as the Red Serge did more than 100 years ago. They swim where the North-West Mounted Police, fur traders and wranglers once bathed.

“This is as much a part of Western culture as carbon in the rocks,” says Jesse Doenz, the rodeo chairman.

He and others were worried that the UNESCO designation could lead to the rodeo being ousted from the park. The Writing-on-Stone Rodeo committee’s lease expires at the end of the year. Instead, it is being extended for five years.

“From our perspective, we see the rodeo as a unique feature of the park,” says Travis Sjovold, the manager at Writing-on-Stone. “We value the people it brings to us. We will work with them to finalize details. Nothing will change.”

The park opened in 1957, one year before the Writing-on-Stone Saddle Club was established. From it came the rodeo committee, and, in 1966, the first rodeo.

The land where it is held was donated to Alberta Parks by John and Grace O’Hara, who farmed and raised cattle. Their son, Les, was a founding member of the Writing-on-Stone Saddle Club and, at 76, remains involved in the rodeo. “I’m pretty proud of this,” Mr. O’Hara says as he opens a gate and barrel racers enter the ring. He wears suspenders and jeans and a broad smile.

His parents were voluntary caretakers of the park in the run-up to its opening. Les was the first paid caretaker, earning $150 a month as he lived in a shack and cooked on a burner plate. “I’m as old as dirt,” he says.

He tried his hand at calf roping and steer riding, but was never very good. “Once they started riding bulls here I developed a sudden problem with my back,” he says. “I got a yellow stripe right down the middle of it.”

He attended a recent meeting with park representatives and is optimistic that it will continue unimpeded.

“If it is handled correctly, it will work for us and everybody,” Mr. O’Hara says.

About 60,000 visitors come to Writing-on-Stone each year to view the petroglyphs that were etched and the pictographs that were painted on rocks using antlers and bone. Some date back 2,000 years.

First Nations people camped at Writing-on-Stone as they followed bison herds across the Plains. Most of the rock drawings and paintings were done by Blackfoot as a means of speaking to the spirits and one another. Some of the animals, shield-bearing warriors and shamans were left by Cree, Gros Ventre, Assiniboine, Crow, Kutenai and Shoshone.

“I love sharing this with the world,” says Randy Bottle, a Blackfoot elder who gives interpretive tours. “It is a very sacred and special place.”

The rodeo takes place in the shadows of the archeological preserve. An outcropping covered by paintings of a beaver and a warrior are just 100 metres away. So are hoodoos, towering columns of rock sculpted into spectacular shapes by erosion over thousands of years. Some look like mushrooms, another a church steeple.

“It is a very picturesque place to hold a rodeo,” says Joan Hughson, its secretary. Her late husband, Darrell, was a member of the first rodeo committee.

“We are small-town people doing what we love," says Mr. Doenz, the chairman.

Generators and lights were brought in over the long weekend because there is no electricity for night events. Competitors and spectators baked in blistering heat during the day. Water trucks circled the grounds and dampened dusty, gravel roads. Young boys practised roping skills on a steer constructed out of PVC pipe.

Tana Millard, a barrel racer from Eckville, Alta., cooled off by floating on a tube in the Milk River. Horses took sips of water and splashed around her.

“This is a lot of people’s favourite rodeo,” Ms. Millard says. “It’s pretty much one of a kind. You don’t find too many places like Writing-on-Stone.”

Less than a kilometre away, the hills come alive at sunset at an overlook in the park. Grouse feed in the sage. A pair of coyotes hunt in the grass. A deer swims across the river toward a stand of cottonwood trees. 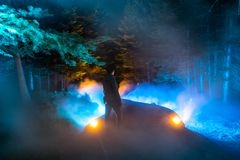 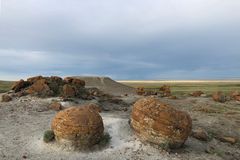 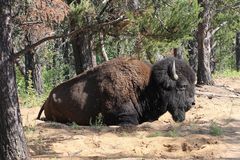 Follow Marty Klinkenberg on Twitter @globemartyk
Report an error Editorial code of conduct
Due to technical reasons, we have temporarily removed commenting from our articles. We hope to have this fixed soon. Thank you for your patience. If you are looking to give feedback on our new site, please send it along to feedback@globeandmail.com. If you want to write a letter to the editor, please forward to letters@globeandmail.com.
Comments