In American politics, the idea that the president helms the economy runs deep. Think of how closely the 1980s boom is associated with Ronald Reagan or, conversely, how stagflation and high unemployment sank Jimmy Carter’s legacy. So, on election night back in November 2016 (that would be a decade ago in Trump presidential years), it was widely expected that once Donald Trump got his hands on the wheel, his chaotic plan for endless trade wars, isolationism and deep cuts to immigration would steer the U.S.S. Economy into the rocks.

Instead, America’s economy has motored along quite smoothly, thank you very much, even if little else in the country has. Stock prices are near all-time highs, unemployment is at record lows, and the U.S. has enjoyed its longest stretch of uninterrupted growth ever. But rather than reinforce the notion that sheer political will can shape the economy, the Trump presidency can finally put to lie that myth. Contrary to all the promises campaigning politicians in the U.S. and Canada make about jobs and growth, and the worry and hope voters invest in them, who’s in charge matters very little to how an economy unfolds during their time in office.

In the U.S., the biggest proponent of the president-as-helmsman theory these days is the president himself, who’s never met a positive data point he wouldn’t pat himself on the back for. “The Economy is the BEST IT HAS EVER BEEN! Even much of the Fake News is giving me credit for that!” he tweeted back in June, after one economic release or another.

In reality, the $20-trillion U.S. economy is simply too vast, complex and fluid to be immediately impacted by any one administration’s policies, good or bad. Booms and busts are a natural part of capitalist economies, and are driven by things like supply and demand, investment and the availability of credit, none of which can be isolated and controlled by political leaders.

Arguably the biggest factor driving the economy since the end of the Great Recession has been low interest rates. Presidents don’t control monetary policy, but they do pick the central bankers who do. Trump has endlessly berated his own selection for Federal Reserve chair, Jerome Powell, to reverse some of the Fed’s five hikes since 2017, but Powell has steadfastly defended the Federal Reserve’s independence from political interference. The Fed did switch gears with a rate cut in July; however, it likely won’t be alone—some observers believe central banks in Europe, the U.K. and Canada may follow suit.

A few years ago, the economists Alan Blinder and Mark Watson analyzed decades of presidential history and economic data. Their paper found that the economy had fared better under Democratic presidents than Republican ones. More important, they found that the difference in performance could largely be chalked up to four factors over which the administrations had little control, like more favourable oil prices, positive productivity shocks like advances in technology, a more vibrant global economy and bursts of consumer optimism.

In other words, for a president to be considered a good steward of the economy (or not), a whole lot comes down to timing. Or, as the two economists put it: “just good luck.”

But wait, the MAGA crowd seethes, this is just another example of critics not giving Trump his due. The economy has done so well, they argue, not despite the President’s bull-in-a-china-shop style, but because of it. There’s just one problem: The performance of the U.S. economy under Trump is almost indistinguishable from his predecessor’s second term, which Trump has variously described as “disastrous” and a “total failure.” Whether it’s real GDP, real wages, job creation or even Trump’s favourite barometer, stock prices, the trend lines have been remarkably similar.

The two signature measures of Trump’s first term have been protectionism and tax cuts, yet for all the disruption they’ve caused, the benefits have been marginal. For instance, the employment gains from steel tariffs—a measly 1,400 steel jobs have been added since Trump came to office—got cancelled out by cutbacks at manufacturers contending with higher steel prices. Some businesses took their corporate tax cut windfall and reinvested it back into their operations, nudging business spending as a share of gross domestic product back to its long-term average. But many also just used it to buy back their own shares. As for the personal tax cuts, they are temporary measures and so will have little effect on long-term growth.

What Trump’s first term shows is an economy that’s as resilient to negative political shocks as it is resistant to efforts to goose it.

We’d do well to remember this lesson ourselves in Canada as federal party leaders of all stripes promise prosperity and jobs, while offering dire warnings about what will happen if the other side wins.

As with past elections, surveys show Canadians rank the economy and jobs at or near the top of their list of priorities, and candidates and the electorate seem more than happy to play along with the idea that whoever wins will inherit a set of levers and pulleys to steer the economic ship as they see fit.

Prime Minister Justin Trudeau came to office on the promise that large and directed government spending would reshape the Canadian economy, and create a plethora of new and sustainable jobs. Liberals can point to some policy measures that moved the needle, such as the drop in child poverty rates after the Canada Child Benefit was introduced. But the fact remains that outside shocks—whether it was the 2008 global financial crisis, the 2014 oil crash, Trump’s war on NAFTA or the Bank of Canada’s rate hikes—have done far more to define how Canada’s economy has unfolded over the past decade than anything Stephen Harper or Trudeau did. Ultimately, when the U.S. booms, Canada booms. When the U.S. busts, so do we.

For all their supposed differences in policy, average economic growth rates during Harper’s last term and Trudeau’s first term (as of the first quarter) were similarly middling—2.3% versus 2%.

It’s not that politicians can’t affect long-term change. The different approaches Trump and Trudeau have taken to immigration, for instance, will be felt as aging populations on both sides of the border become a drag on growth. And policies around health care, regulation and international relations can all nudge the path an economy takes over the course of decades. But with voters focused on the immediate future, as they worry about their jobs and paycheques, the best-intentioned economic policies will be overtaken by events beyond any president or prime minister’s control.

With the current economic expansion in both the U.S. and Canada growing long in the tooth, it’s inevitable the cycle will eventually turn. When it does, you can be sure political leaders will claim to have a plan to steer the economy back to growth. The best thing voters can do is ignore them. 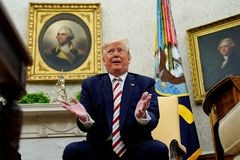 Trump: ‘I am the chosen one’ to take on China over trade Subscriber content
August 21, 2019 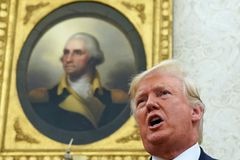 Trump says he had to ‘take China on,’ regardless of short-term impact on U.S. economy
August 21, 2019 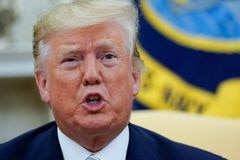