The head of the labour union representing most hourly workers at the U.S. automakers struck an adversarial tone on Monday, vowing in likely contentious talks for new four-year deals that they want to share in the companies’ profits.

The United Auto Workers and Ford Motor Co officially launched negotiations with a handshake between union President Gary Jones and the automaker’s executive chairman, Bill Ford. Soon after, the union head said his members’ jobs had been outsourced to Mexico, China and elsewhere in the race to cut costs.

“With this year’s negotiations, we will halt that race to the bottom,” Jones said at the event at the Dearborn, Michigan, headquarters of the No. 2 U.S. automaker. “We will protect our work, our jobs and our way of life,” he added.

Rising health care costs, job security and the use of temporary workers are also expected to be major sticking points.

Bill Ford acknowledged there would be “a lot of tough issues; there always are,” but was confident a deal could be reached.

General Motors Co and Fiat Chrysler Automobiles NV (FCA) will kick off their own talks with the UAW on Tuesday.

The discussions come at a tricky time for both sides.

When the negotiators for the union and Detroit’s automakers last sat across the table from each other in 2015, U.S. new vehicle sales were booming.

But sales are expected to decline this year and in 2020, meaning Ford, GM and FCA are all under pressure to bolster profits. Automakers also face rising costs associated with the development of electric vehicles and self-driving cars, although Jones said the union wanted to aid in the development of those businesses.

Meanwhile, the UAW has its own problems.

The union has been struggling with a wide-ranging federal corruption probe. So far seven people linked to the union and FCA have been sentenced in an investigation into illegal payouts to UAW officials.

Jones expressed concern about Ford’s growing alliance with VW, given the German automaker’s resistance in Tennessee. On Friday, Ford and Volkswagen said they will jointly develop electric and self-driving vehicles.

The Detroit automakers also will likely point to the competitive disadvantage affecting them, with average hourly labour costs ranging from $55 for Fiat Chrysler to $63 for GM, compared with only $50 for the international automakers with U.S. plants according to the Center for Automotive Research.

One way foreign automakers have benefited is through the heavier use of temporary or outsourced employment, but Jones said the union wants to curtail, not expand, that use.

At its peak in 1979, the UAW represented 1.5 million workers. Last year, after nine years of gains, membership dropped again, falling 8 per cent to below 400,000. The UAW represents around 140,000 workers at Detroit’s automakers.

GM in particular has been a target of union ire since announcing the closure of five North American plants late last year.

That move drew widespread condemnation, including from Republican U.S. President Donald Trump. Criticism has persisted despite GM’s stated efforts to seek jobs at other plants for all displaced workers.

During a speech at the union’s bargaining convention in March, Jones put Detroit’s automakers “on notice,” signalling a tougher stance on talks.

“There will be no more quiet closing of plants, no more shipping jobs to Mexico and abroad without a sound,” he said.

During the convention, the union announced an increase in the amount of money paid to members if they go on strike.

Volkswagen zooms ahead in extension of alliance with Ford to electric, automated cars Subscriber content
July 12, 2019 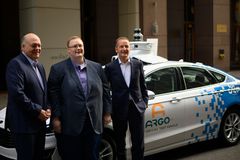 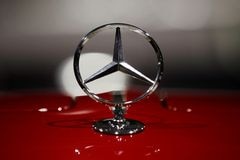 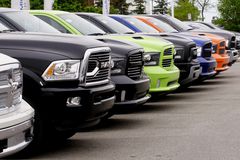